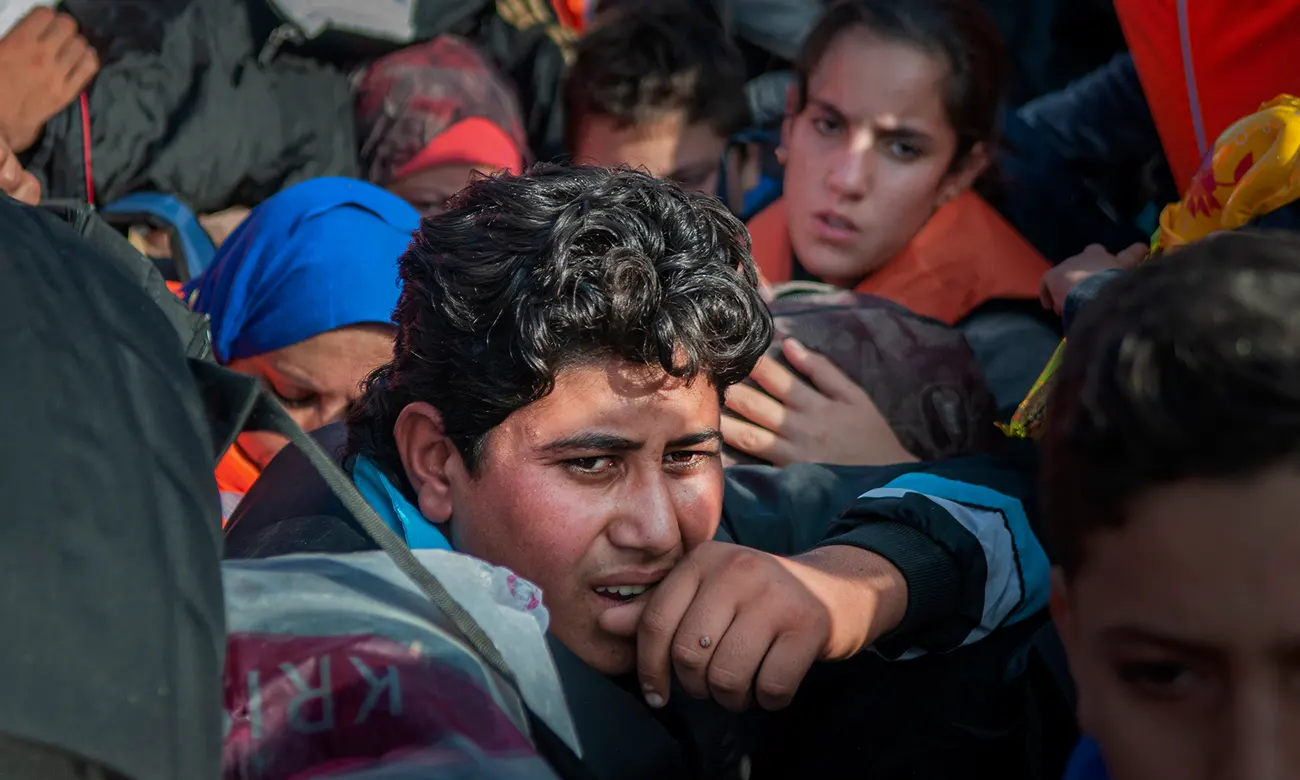 A moment in history’: making a perilous sea-crossing with refugees – photo essay

Ahead of a UK exhibition of her photo series Journey in the Death Boat, Güliz Vural describes travelling with Syrians being smuggled to Greece from Turkey

by Amie Ferris-Rotman and Isabel Choat

Standing on a Turkish beach ready to join a group of Syrian refugees on an inflatable boat bound for Greece, the photojournalist Güliz Vural’s biggest fear was that the people traffickers organising the illegal crossing would not let her onboard.

If she had known that within a few hours of leaving Turkey she would be under arrest, accused of people trafficking herself, she would have thought twice about the journey.

On that bright October morning the smugglers intimidated and humiliated the refugees who had gathered on the shore. “They were dangerous people, and rude,” Vural, 41, says through an interpreter.

But they agreed that she could accompany the migrants and eventually they set off, nearly 50 people crammed on to a boat designed for 12, their fluorescent lifejackets a patchwork of colours against the clear sky. Soon they were in the cobalt blue water of the Aegean Sea, leaving Turkey’s Sivrice Bay behind, and heading for the Greek island of Lesbos.

The families held on to each other tightly. Some rubbed and kissed prayer beads, before ritualistically tossing them overboard.

They passed the 90-minute journey mostly in silence, except for occasionally throwing their hands into the air to pray. “Ya Allah!” they would cry out. “Oh God!”

Wearing a wetsuit and perched at the bow, not daring to move for fear of destabilising the boat, Vural spent the journey training her camera lens on the anxious faces of her fellow passengers. “I took photos non-stop. I wanted to document [their experience]. This was a moment in history.”

After the outbreak of civil war in Syria in 2011, Vural spent three years documenting the lives of refugees who had fled the violence and destruction of their homeland. She met families living in temporary accommodation in Istanbul and travelled to the border town of Reyhanlı in the southern province of Hatay, near the Syrian border.

The grief and pain she saw in the people she met resonated with her. “My Kurdish family were forced from south-east Turkey in 1977. Even though I was born in Istanbul and wasn’t a refugee, I felt a lack of belonging. We lost our culture; it felt like our Kurdish history had been deleted. When I saw how traumatic the Syrian refugees’ lives were, it reminded me of my own family’s trauma, and it really affected me.”

Some of the refugees she encountered were happy to stay in Turkey, but others had dreams of making it to Europe. Stories of perilous sea crossings between Turkey and Greece began to emerge as waves of refugees risked their lives to start anew in the west. In total, more than a million migrants and refugees entered Europe in 2015, the vast majority via sea from Turkey. The tragic image of two-year-old Syrian Alan Kurdi lying face down on a Turkish beach after drowning on a sea crossing came to symbolise the desperate plight of people who dared to believe in a better future.

According to the International Organization for Migration, at least 3,700 migrants died trying to cross the Mediterranean in 2015 – more than 800 of them on the Turkey-Greece route that Vural documented. Since 2014, more than 22,000 migrants have been recorded as missing in the Mediterranean.

It was the biggest migration crisis in memory and Vural felt she had to record it in some way. “I saw many journalists [reporting] events from the shore. I wanted to be on the boat with [the refugees].”

In October 2015 she travelled to the Aegean coast, just south of Çanakkale, a known departure point for illegal crossings “My husband is a journalist and he understood why I had to go, but I didn’t tell my parents or my daughter. I didn’t want them to worry,” she says.

The hazardous journey is expensive: the migrants Vural joined paid about £2,000 for each person. They were understandably anxious about the journey but Vural saw their courage too. They had to abandon their belongings when the smugglers ordered them to make space for everyone and squeeze in. They were also bidding farewell to their families and to the lives left behind. “They brought only the future with them,” says Vural.

After arriving in Greece, the migrants were sent to a refugee camp for processing. But Vural was arrested by the Greek coastguard as a suspected people-smuggler.

“For the first time in my life I was handcuffed, then I was taken to the judge, who said I would be tried for two serious crimes: human trafficking and entering the country illegally. They said I faced a jail term of 25 years.”

She was shocked and scared but, she says, “I tried not to be regretful.”

After calls to the Turkish embassy, letters from her newspaper and a €3,000 (£2,600) warranty, the authorities accepted that she was a journalist and released her five days later. But her confiscated phone was never returned to her so she was unable to contact the refugees whose number she had taken.

But Vural had the photographs. She named the series Journey in the Death Boat but the Turkish media, which had splashed her photo on the front pages when she was arrested, showed no interest in the story of the refugees’ journey. Though she was never given a reason, Vural believes this is because the project criticises Turkey for allowing people smugglers to operate.

Next week the project will go on display for the first time in the UK in an exhibition at Coventry Cathedral on the 10-12 November as part of the sixthRising Global Peace Forum. The series is a tribute to her determination, and to the refugees who risked everything for a better life. Today, she thinks about the migrants often, wondering how many made it to their dream destination: Germany.

Vural is now a migrant herself. In April she moved to the UK to set up her photography business, dismayed by the political climate in Turkey, where “opposition journalists no longer have a right to life,” she says, since the Turkish government cracked down on free speech after the 2016 failed coup attempt.

She is acutely aware of the freedom she has to return to Turkey whenever she wishes. She plans to use that freedom to continue photographing those who have little chance of returning home. “I want to continue to work with refugees in the UK,” she says. 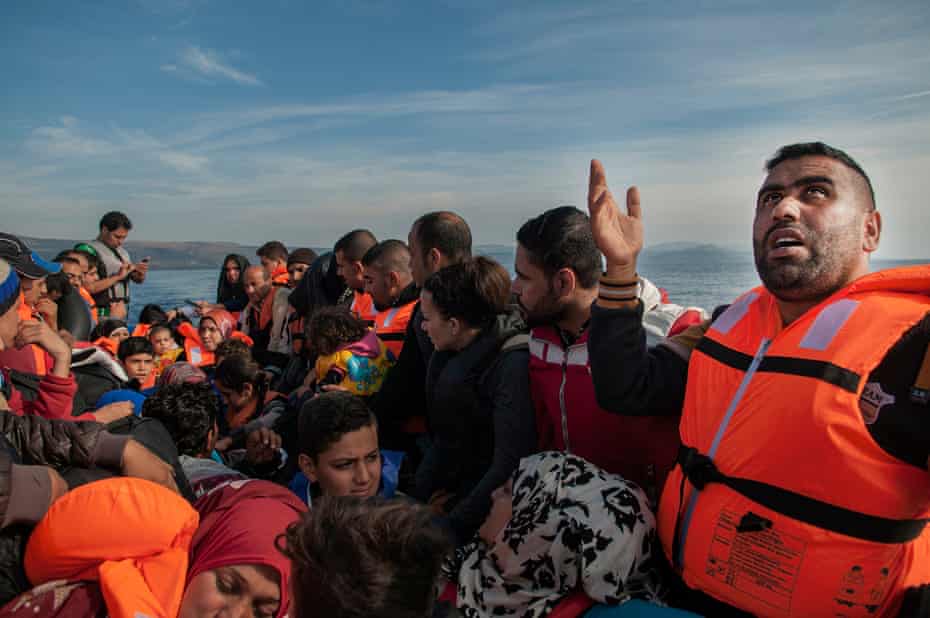