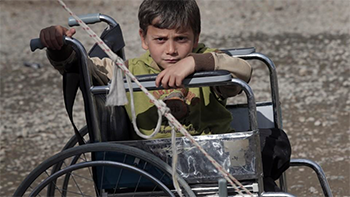 A'1. Objectives and field of activity of the Kinoniko EKAV

The Kinoniko EKAV is an independent social organization with the aim of combating all forms of social exclusion. The name "Kinoniko EKAV" refers to the concept of dealing with emergencies, where there are socially marginalized and literally injured people in their social status.

Kinoniko EKAV aims to reach out and help people and groups who have lost the ability to meet their basic needs (housing, food, health care, etc.). Such groups include, for example, homeless people,  children who live in the streets, refugees and immigrants, who lack legal documents, etc. In Greece of the prolonged crisis, the number of these people is increasing, and social marginalization is getting bigger.

Kinoniko EKAV acts through mobile teams, providing immediate sanitary, psychological, and social care, on the very spot where people needing it are identified. The first objective is to create a human relationship, which is then used to lead gradually to social reintegration. In addition, Kinoniko EKAV organizes hospitality spaces, where these people can find care and company, where they can socialize and reclaim their rights. In the hospitality spaces, counseling on medical, health, psychological and legal matters are provided.

Kinoniko EKAV was founded in Greece by a group of physicians, health professionals, journalists, and social and political scientists, who already had a wealth of experience in the field of social action and volunteer humanitarian missions. The main motivation for its creation has been the need to contribute to tackling the social impact of the crisis, which is pushing more and more fellow citizens towards the margins of society.

Kinoniko EKAV is an organization, independent of any political, religious, governmental or other body, with reference to the Universal Declaration of Human Rights, as well as the values of Freedom, Equality and Solidarity, as set out in the Charter of Principles of the Organization.

A'2. Scope of the Code of Values and Principles

This Code of Values and Principles concerns all members and representatives of Kinoniko EKAV, all the Organization’s employees, as well as volunteers and friends who participate in the activities of the organization. All these individuals are defined in the present text with the term "members of Kinoniko EKAV".

The Code of Values and Principles reflects the expectation that all members of Kinoniko EKAV participate and support the activities of the Organization, with honesty, integrity, independence and discretion, following transparent and effective procedures, according to the current legal framework, aiming at the best interest of the beneficiaries. This Code also includes specific guidelines and instructions regarding the various financial transactions, potential conflicts of interest that arise, members' relationships with third parties, the protection of beneficiaries and the confidentiality of information.

Kinoniko EKAV regularly informs its members about the Organisation’s planned goals, the relevant legal issues, the standards of conduct that are appropriate in each case, as well as the limits and prohibitions that are reduced to their duties. The members of Kinoniko EKAV observe the personal and collective standards of ethical behavior, which are defined in this Code and act in a way, so as not to cause any harm or hinder the Organization’s activity.

The Code of Values and Principles of Kinoniko EKAV includes the following nine sections, which describe the specific rules that must be followed by the members of the organization.

Each section contains a brief introduction outlining the policy pursued in this field, as well as further information to help the implementation of this policy. This Code may not include all possible situations that may arise in the organisation’s activity but records the guidelines that help the people involved with Kinoniko EKAV to make decisions based on the value identity of the Organization.

Any issue not explicitly mentioned in this Code may be discussed with the Legal or Financial Department of the Organization or its institutions, always within the framework of the objectives of Kinoniko EKAV.

B.1. Compliance with laws, regulations and standards

The members of Kinoniko EKAV comply with the applicable laws, regulations and standards, in order to always observe the highest legal, humanitarian and moral principles.

In particular, the representatives of Kinoniko EKAV become familiar and comply with:

B 2. Transparency and accountability of administrative procedures and financial transactions

Among others and in particular:

B.3. Receipt of rewards, gifts and gratuities

Both in Greece and in other countries, the delivery and receipt of gifts is accompanied by a variety of rules, standards, ethics and customs. In some cases, gifts or services of small value may be given or received on transparency terms and without the explicit obligation of either party. All gifts and gratuities, whether given or received, must thebe in accordance with the laws, rules, regulations of Kinoniko EKAV, as well as with the applicable local customs and traditions.

The following gifts or payments are not allowed in any case:

However, it is allowed to give or receive souvenirs or to participate in entertainment events or meals according to local customs and traditions, which do not exceed the value of € 50 per person and do not create any obligation for any party.

B.4. Conflict of interests

Conflict of interest arises when the decisions of a member of Kinoniko EKAV may be influenced by personal or financial interests, commitments or obligations. The Organization systematically seeks to avoid the occurrence of such situations, the possibility of which, however, cannot be completely ruled out. For this reason, the cases where there may be a conflict of interest, concerning members of Kinoniko EKAV, or their families, are notified in writing to the competent supervisor. In these cases, the members concerned do not take part in any decision related to the case.

The following are some examples of conflicts of interest that may arise:

B.5. Security and protection of beneficiaries

The members of Kinoniko EKAV have a duty to treat people and the communities served by the Organization, with dignity, respect to ensure their safety and protection.

The basic principles during the implementation of the Organization’s activity, in order to ensure the protection and safety of the beneficiaries, include, among others, the following instructions and rules:

B.6. Information confidential or related to copyright

Kinoniko EKAV has at its disposal information, in written or electronic form, that have been recorded by the Organization or have come to its knowledge and are subject to confidentiality. The members of Kinoniko EKAV take all the necessary measures so that this confidential information is not disclosed and is not used by any party.

Confidential information is considered to include:

It is self-evident that the unauthorized disclosure of this information or their negligent use, may lead to the termination of the employment contract of the responsible member of Kinoniko EKAV, as well as the initiation of legal actions against him.

Μembers of Kinoniko EKAV abstain from any illegal or criminal act. They are particularly far from:

B.8. Report a possible violation

Μembers of Kinoniko EKAV immediately report any violation of this Code, as well as the Code of Conduct for Suppliers, which comes to their notice. In particular, any member of the Organization who discovers or has a reasonable suspicion of committing fraud (within the meaning of paragraph B.7.) or other serious act contrary to the principles of this Code (see e.g., paragraph B.5.), communicates with the responsible for the program or action in which it participates, in writing if necessary, maintaining the right to the confidentiality of the information it conveys. The person in charge, informs the Board of Directors, through its chairman.

Any attempt at harassment or retaliation against a member who reported a breach of the Code in good faith will result in termination of the employment contract or any other relationship of the member who made the attempt with the Organization.

There is no condition of exemption of the Code of Values and Principles of Kinoniko EKAV.

The observance of this Code and the compliance with its provisions are ensured by the written statement of the member of Kinoniko EKAV, at the beginning of its participation in an action of the Organization, that became aware of the present and accepted it unconditionally. The Management of Kinoniko EKAV undertakes the training of the members for the observance of the Code.

The above text, approved by the Board and the General Assembly of Kinoniko EKAV, is available to anyone interested through the website of the Organization.